Our Commitment to Hemophilia

One of our areas of research at Spark Therapeutics is hemophilia, an inherited bleeding disorder caused by mutations in the genes that encode clotting factors. These clotting factors are normally synthesized in the liver. Led by researchers and clinicians with long-standing commitment to the hemophilia community, we recognize the essential need to understand and gain important perspectives from patients, caregivers and leaders in the community. Learn more about our commitment to hemophilia and our hemophilia team below.

Hemophilia is typically inherited, meaning that it’s passed through the parents’ genes or DNA, although approximately one-third of cases are due to spontaneous mutation, or change in a gene. The genes for hemophilia A and B are carried on the X chromosome. Therefore, hemophilia A is called an X-linked (or sex-linked) disorder. Men are affected by hemophilia and women are considered “carriers.” Though rare, women can have hemophilia, too.

The current standard of care for hemophilia is to control or prevent bleeding episodes through clotting factor replacement therapy, which is taken for life. Replacement factor is either recombinant (genetically engineered) or plasma-derived (from healthy blood donors) and must be delivered by frequent Intravenous (IV) infusions.

Gene therapy research is an investigational approach to treat or prevent genetic disease. This research is showing exciting potential for patients with hemophilia.

LEARN MORE ABOUT OUR APPROACH TO GENE THERAPY RESEARCH
Hemophilia is a part of me, but it’s not all of me.
×

Jolene Scicchitano, a sixth-grade math teacher living in rural Pennsylvania, didn’t know she was a carrier for hemophilia A until her first son, Jacob, was born nearly 30 years ago. Her younger sons, Seth and Ben, were later born with hemophilia A as well.

“I had so many questions and so much fear,” Jolene recalled. “My vision was that they’re going to have a very difficult life with a lot of pain.” To compound her fears, Jacob was born at the height of the blood contamination epidemic in the 1980s, and Jolene worried about the safety and purity of the plasma products that were standard-of-care to treat hemophilia at the time.

As a mother of three young sons living with hemophilia, Jolene also became their caregiver. She spent numerous hours over the years administering and tracking their time-consuming and costly treatments. “The most difficult thing was taking care of their bleeding and the damage to their joints. But in addition to all of that, it was the amount of time – filing insurance paperwork, keeping treatment logs and taking care of bills. It was another part-time job,” she said.

Despite the hurdles of ensuring her sons received consistent and adequate treatment over the years, Jolene persevered and insisted that hemophilia would not define her boys’ childhood. Her family’s mantra became: hemophilia is a part of me, but it’s not all of me.

She continued to seek out as much information as she could. She educated herself and read whatever she could find, hoping for better treatments for her boys. Her family also turned to the local hemophilia community to meet others with this inherited disease and gain access to new information and resources. “Living in a rural area, getting to those conferences, we were able to meet other people [living with hemophilia]. The best way to learn about anything is by living through it. I think we have one of the best communities.”

And as Jacob, Seth and Ben grew up, they found daily inspiration from each other. “They’re resilient and perseverant,” Jolene said of her sons. While she worried about the kind of life her boys would lead with a diagnosis of hemophilia A, Jolene now looks to the future with great hope.

Seth, Jacob and Ben, living with hemophilia A, with their mom, Jolene 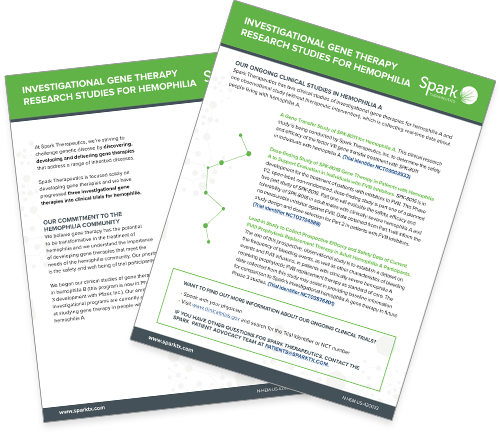 We believe gene therapy has the potential to be transformative in the treatment of hemophilia, and we understand the importance of developing gene therapies that meet the needs of the hemophilia community. Our priority is the safety and well-being of trial participants. Our enrolling investigational hemophilia programs are currently aimed at studying gene therapy in people with hemophilia A. 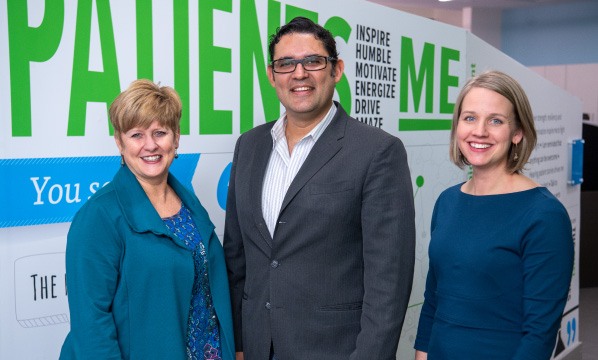 We work with advocacy groups from around the world to help connect patients and families to education, research, support services, and to each other. Below, please find a partial listing of several groups from the hemophilia advocacy community.

Spark Therapeutics sponsors Hemophilia Forward, a place for patients and caregivers in the hemophilia community to read stories from community members, access resources, and learn about the science of gene therapy research, which is being investigated for hemophilia.

World Federation of Hemophilia
https://www.wfh.org
“Lighting It Up Red” in celebration of World Hemophilia Day
×

“Lighting It Up Red” in celebration of World Hemophilia Day

Spark Therapeutics is proud to partner with this community and to help create visibility for people living with bleeding disorders.

Learn more about World Hemophilia Day and the “Light It Up Red” initiative here: https://www.wfh.org/en/whd

Spark Therapeutics is proud to be a part of the patient communities we serve and our local community in Philadelphia where we are headquartered.

On October 6, friends, families and allies of the Foundation Fighting Blindness (FFB), a nonprofit organization focused on research for preventing and treating blindness caused by inherited retinal diseases filled Philadelphia’s Independence Hall (famously where the United States Declaration of Independence and the United States Constitution were adopted) to participate in FFB’s annual Philadelphia VisionWalk. The Spark team, which numbered more than 40, sported their new Spark Cares shirts to show support to the community.

Team Spark also participated in the Eastern PA Chapter of the National Hemophilia Foundation’s annual Trick or Trot Family Walk on October 7. For the first time in its history, the event was held at the Philadelphia Zoo, where more than 50 Spark team members and their children, many in costume, gathered to celebrate the community spirit, raise awareness of hemophilia and associated research and build our connection with the local hemophilia community.