Our Commitment to Late-Onset Pompe Disease

We are dedicated to researching gene therapy with the goal of combating inherited diseases, including the lysosomal storage disorder, Pompe disease, which can dramatically impact skeletal muscle function. We work with patients, their advocates and leading researchers on the path to understand and design investigational gene therapies in hopes of treating this serious disease.

What is Pompe disease?

Pompe disease is a lysosomal storage disorder and neuromuscular disease, with systemic, multi-organ manifestations resulting from mutations in the gene encoding acid alpha-glucosidase (GAA). The disease is oftentimes life-limiting and can be fatal. Mutations in the gene prevent the GAA enzyme from breaking down the energy storage molecule, glycogen, effectively, which allows it to build up to toxic levels in lysosomes, common structures known as organelles found in cells in the body. This can damage organs and tissues throughout the body, particularly in muscles, causing Pompe disease.

“It sounds strange to say, but it’s a really exciting time: We have so many wonderful people (and companies) putting their efforts and talents into helping people with rare diseases.”
×

“It sounds strange to say, but it’s a really exciting time: We have so many wonderful people (and companies) putting their efforts and talents into helping people with rare diseases.”

After years of regularly experiencing difficulty going up stairs, Ryan mentioned something to his doctor. His doctor simply checked another box on his blood test request, in addition to the liver enzyme panel which had regularly been tested since he was a kid due to high liver enzyme levels. This additional blood test result showed an elevated CK (Creatine Kinase), which can be an indication of muscle damage. This result kicked off a process of working with a variety of specialists towards a diagnosis. A year and a half later, after eliminating more common muscle diseases, a little luck intervened – a blood sample to test for Limb Girdle Muscular Dystrophy was sent to a medical center with a comprehensive policy of concurrently screening for diseases with symptom overlap, one of which is Pompe disease, a rare genetic disease.

Pompe disease is caused by mutations, also known as variants, in the acid alpha-glucosidase (GAA) gene that lead to a deficiency in a protein (also called GAA) responsible for breaking down a complex sugar (glycogen) in a specific part of the cell known as a lysosome. The accumulation of this glycogen leads to breakdown of muscle in the adjacent cell structure. By using a NGS (next generation sequencing) technique on Ryan’s simple blood sample, the lab was able to identify two such variants which are known in Pompe disease.

Armed with a diagnosis, Ryan started to put more pieces of the puzzle together during a period of reflection. He realized his symptoms actually began at a young age. In old home videos, Ryan saw himself at his kindergarten graduation pushing off his legs with his hands to get up the stairs to the stage, and that he’d get up off of the ice a little more slowly than his teammates during drills at hockey practices. Those abnormal liver enzyme levels doctors had been chasing for 15+ years now had an explanation as well – they are common in Pompe disease and other diseases affecting muscles. Growing up he also regularly received comments on his posture and unique walk. That was Pompe disease the whole time.

Ryan’s lengthy path to diagnosis is common for those with a rare disease. Although he wasn’t diagnosed until he was an adult and despite dealing with symptoms his whole life, Ryan doesn’t regret how his life has unfolded.

“The challenges I’ve faced have shaped me, and I’ve developed values and traits that I’m proud of,” said Ryan. “That’s not to say we shouldn’t do everything possible to push for earlier diagnosis across all rare diseases, because it is critical to do so. I also think there is an understanding among the rare disease community, bonded by the knowledge that we’ve all faced challenges as we march uphill and into a headwind.”

Post-diagnosis, as a “new” Pompe patient, Ryan worked to get up-to-speed and educated on the disease so that he wouldn’t have to be a bystander on the journey. As is the experience with many people living with a rare disease or still searching for diagnosis, the start of this journey was scary with feelings of uncertainty, fear and isolation. Those feelings still exist, but as he learned about the disease and took inspiration from others facing challenges associated with Pompe and other rare diseases, new feelings took over…

“There was an overwhelming interest in the fascinating and wonderful ways that our bodies and genetics work, along with the amazing stories of extraordinary people who have contributed to progress thus far. A sense of excitement that we are on the cusp of really outstanding scientific breakthroughs and the potential that they have,” said Ryan. His goal now is to channel this new energy into positive action, charged with a sense of responsibility to participate and help elevate and empower the role that patients and families play in the rare disease ecosystem.

Part of Ryan’s education has come from actively seeking out a community. He has found this through networking and follow-up at various patient, scientific and advocacy-focused meetings and conferences, including the AMDA (Acid Maltase Deficiency Association), UPF (United Pompe Foundation) and IPA (International Pompe Foundation). Outside of Pompe disease, Ryan has also enjoyed learning and networking through Global Genes and EveryLife Foundation events, among others. Another tool Ryan uses to stay current on industry news and advancements is ClinicalTrials.gov, which lists private and publicly funded clinical studies from around the world and is searchable by disease and country.

With a richer understanding of the rare disease ecosystem, Ryan now realizes the tremendous community that already exists. His goal is to work with that community and empower patients to move from “subjects” to participants, collaborators and partners that help accelerate progress in the understanding and treatment of rare diseases.

“It sounds strange to say, but it’s a really exciting time: We have so many wonderful people (and companies) putting their efforts and talents into helping people with rare diseases.” He continued, “we’re on the cusp of being able to deliver diagnoses and treatments, for the first time, to many of the ten percent of people in the United States that have one of over 7,000 rare diseases. While with others, like Pompe disease, we’re working on second generation treatments that can focus on improvements beyond just survival.”

“I’m passionate about accelerating progress for Pompe and rare disease patients, with an emphasis on participation, community, patient empowerment, education and the accessibility of information,” concluded Ryan. 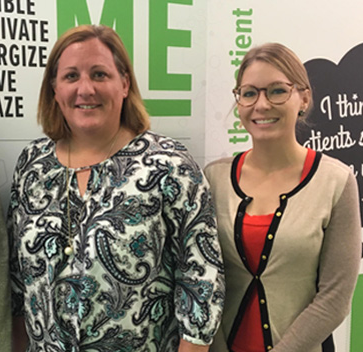 Gene therapy research is an approach to treat or prevent genetic disease. We are researching the potential of gene therapy to treat Pompe disease.

LEARN MORE ABOUT OUR APPROACH TO GENE THERAPY RESEARCH

We work with advocacy groups from around the world to help connect patients and families to education, research, support services and to each other. Below, please find a partial listing of several groups from the Pompe disease advocacy community.

Rare Disease Day (RDD) is commemorated annually on the last day of February to raise awareness globally for rare diseases, rare disease research and the daily impact rare diseases have on patients, families and caregivers. In 2018, the Spark team took our RDD activities to a new level, reaffirming our commitment to championing the patient and celebrating their stories.

Spark welcomed rare disease advocates Kendall Davis and Matthew Crowley to Spark HQ, and employees gathered to hear their stories and mission. Kendall is a director of Global Genes, a patient advocacy organization committed to connect empower and inspire the global rare disease community. She spoke about the organization’s efforts to empower patients to advocate for their health and shared eye-opening information about rare diseases such as the fact that more than 350 million people worldwide are affected by so-called ‘rare’ diseases, due to the sheer number of genetically-driven conditions. Matthew Crowley, a father of two daughters living with Pompe disease, shared the personal challenges facing those impacted by rare diseases, the diagnostic journey and emphasized the importance of strength through family.

To commemorate the day, Spark also launched Rare Disease Lending Libraries at our Philadelphia offices, filled with books sharing the diverse stories of those affected by rare diseases and unveiled a mural decorated with employees’ thoughts and feelings in response to our “Champion the Patient” vision.

To learn more about the long history of research breakthroughs in rare disease, check out #ResearchSparksInvention on Twitter.