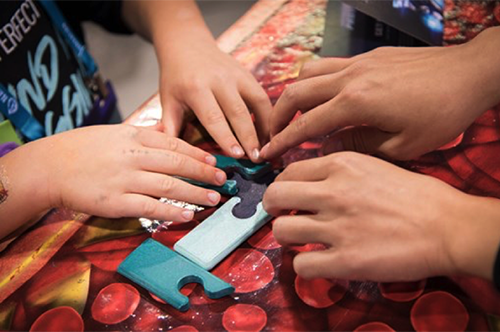 In fall 2019, Team Spark headed to Anaheim, California for the 71st Bleeding Disorders Conference, a signature event from the National Hemophilia Foundation aimed at bringing the hemophilia community together. Spark was a Founding Sponsor of The Science Fair™, a hands-on, immersive exhibit at the Conference that sought to educate children and adults with hemophilia, as well as other attendees, about the science behind bleeding disorders.

More than 800 attendees affected by bleeding disorders participated in activities that comprised the Fair, which was developed with input from a scientific advisory panel of key clinicians, who guided educational messaging for each of the interactive modules, as well as community members who contributed to the final program. Believe Limited intends to share modules of the Science Fair at future scientific and community meetings.

In a press release announcing the sponsorship from April, Spark President and Head of R&D, Dr. Kathy High noted that the Fair “aims to spark the community’s curiosity to understand the underlying science of their disease, so they feel empowered to ask the right questions and make informed decisions related to their medical care.”

Any cookies that may not be particularly necessary for the website to function and is used specifically to collect user personal data via analytics, ads, other embedded contents are termed as non-necessary cookies. It is mandatory to procure user consent prior to running these cookies on your website.